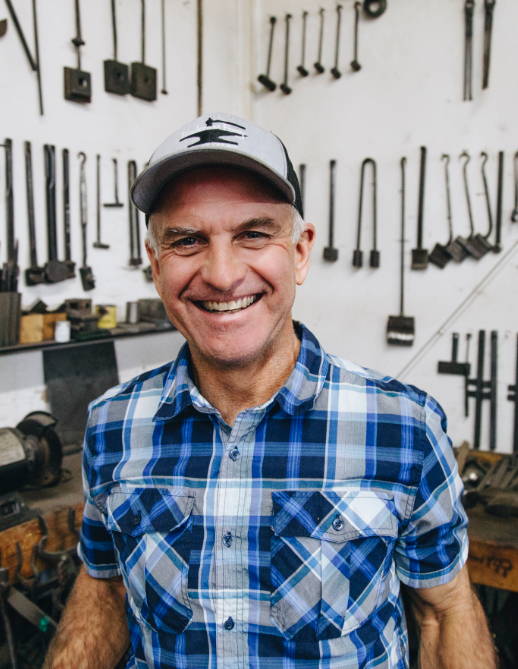 Jeff Wester grew up in the small coastal town of Tillamook Oregon. He moved to Central Oregon to attend college, and befriended a farrier who had a small shop east of Bend. "We'd fire up the old coal forge on a snowy winter night and do some blacksmithing, transforming horseshoes and old steel remnants into useful and creative objects," Jeff recalls. Something in the ancient alchemy of hammer, fire and iron spoke to his soul; and his path was set.

Reading every old book on blacksmithing, and trying to figure out how old forged parts were made, his learning was all by trial and error. Jeff joined the Northwest Blacksmiths Association, and found a lot of other folks doing the same thing. "There was a wealth of knowledge that was passed along from older smiths that were willing to share," Jeff remembers.

The Sisters Country is horse country and in 1983 Jeff began shoeing horses for a living, with his portable blacksmith shop in the back of his truck. "I loved shoeing horses," Jeff recalls, "but as soon as I drove the last nail and dropped the horse's foot, my finished product went straight into the mud, never to be seen again until I picked that foot up eight weeks later to pull the shoe off and put another one on."

In 1987 after graduating from Oregon Institute of Technology in engineering, Jeff set up shop in a yurt. "Times were simple," he recalls with a smile. Within a couple of years, he quit horseshoeing and built a small shop at his house with one employee, handling welding and blacksmithing chores for folks in the Sisters Country.

In 1991, he built a larger shop in town. It had a hitching rail in front to remind Jeff of his roots -- and as reassurance that he could always go back to nailing shoes on horses' hooves to pay the mortgage. That never became necessary, and Ponderosa Forge grew in shop size and employees. Jeff added a machine shop, more forging hammers, anvils, forges, and showrooms.

"I really enjoy the whole process,"Jeff says. "I love to see it evolve from start to finish. Everything starts with a THOUGHT. You add a little creativity, some motivation, mix it all up and throw it in the forge. Take it out red hot, finesse it into shape by hammer and hand, let it cool. Behold! Something to use. Stuff that works, art to look at, and craftsmanship to be proud of. An end product that might inspire another THOUGHT! And here we go again... That's why I love to go to work every morning."

Create an account with us and you'll be able to:

Fill in your email below to request a new password. An email will be sent to the address below containing a link to verify your email address.